In his memoir Chuck Amuck, Chuck Jones wrote: “Friz is a musician as well as an excellent draftsman, and it is not surprising that many of his films are a disarming and intricate web of music (a flurry of sounds) and animation (a flurry of drawings). No student of animation can safely ignore the wizardry of these cartoons — if he can stop laughing long enough to seriously study their beauty.” 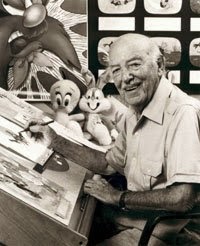 Friz Freleng’s best work is distinguished less by originality than by the strong, often elegant graphic style of the characters, an impulse to send up show biz tropes, and gag and timing senses second to no one in animation. Many of Freleng’s masterpieces play without a word of dialogue, and many of the rest could have.

Freleng worked, briefly, at the Disney studios; an old Kansas City hand, he joined Disney in 1927. He and his old colleagues Hugh Harmon and Rudolph Ising, left to form their own studio, which produced the early Bosko cartoons distributed by Warner Bros.

Here, the Disney staff poses with Margie Gay, the star of its Alice in Wonderland shorts after the studio relocated to California. The next tallest person in the photo is Friz.

Both Harmon and Ising were contemptuous of Disney, but never, as far as I can determine, produced a single short that has any real lasting appeal, and very few that contain enough interest to even make them less than a waste of your time. Their first, Bosko the Talk-Ink Kid, was a sort of test-reel a la the Flesichers, with Ising at the drawing board and the team’s obnoxious new star coming, as it were, out of the inkwell. There seems to be some confusion about whether Bosko was intended as a Mickey Mouse knock-off or a little black boy, but his voice (at least in this short) clearly marks him as a racial caricature — one, furthermore, with a near total lack of charm.

Be that as it may, Harmon-Ising’s eventual distribution contract for Bosko at least got Freleng, who was part of the team, to Warners. I don’t know who animated which sequence in the test, but Bosko’s bit with a piano may, given Friz’s love for music, and his ingenuity with it, provide a clue. 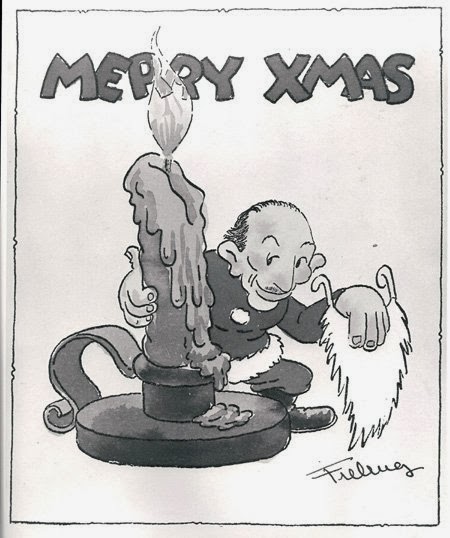 A Freleng Christmas card from the 1930s.

I Haven’t Got a Hat (1935) The first appearance of Porky. Warners badly wanted an animated studio mascot to rival Mickey. The pig character was designed by Freleng, and named for a childhood friend. The studio preferred his sidekick, the tough kitten Beans, but Tex Avery disagreed, and Porky was soon Warners’ first cartoon star.

I Haven’t Got a Hat. Porky’s original voice was provided by Joe Dougherty, a Warners extra who stuttered; his impediment eventually became so pronounced that Freleng sought an actor who could pretend to stutter. Mel Blanc, who started his tenure a year after Porky’s debut, proved the perfect solution. Before Blanc, the character’s stuttering felt uncomfortably real, and could even seem a little cruel; after Blanc, it was fully integrated into the comedy. 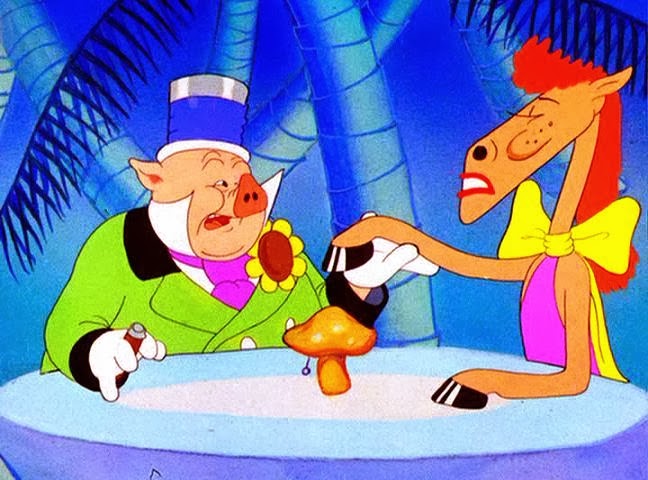 The CooCoo Nut Grove: A 1936 Freleng send-up of Hollywood personalities including a porcine W.C Fields and an all-too-accurately equine Katharine Hepburn.

During the silent-era, combining live action and animation was a surprisingly common occurrence: Max Fleischer often cavorted with Koko the Klown, and in his Kansas City days, Walt Disney’s Alice shorts featured a live girl interacting with animated characters. The technique had waned after sound came in. With You Ought to Be in Pictures (1940) Freleng brought it back with style and verve.

Side-note: Leon Schleshinger, the Warners animation honcho, had a plosive lisp (which, among other things, inspired both Daffy Duck and Sylvester.) An actor dubbed Schleshinger’s voice for his scenes; Leon was delighted with the result.

Side-note the second: Freleng, who had briefly decamped for MGM, may have made the short as a thank-you to Schleshinger for taking him back. He is also said to have based its central Porky Pig/Daffy Duck rivalry on the antagonistic relationship between his fellow animation directors, Chuck Jones and Bob Clampett, with Porky as a stand-in for Jones. 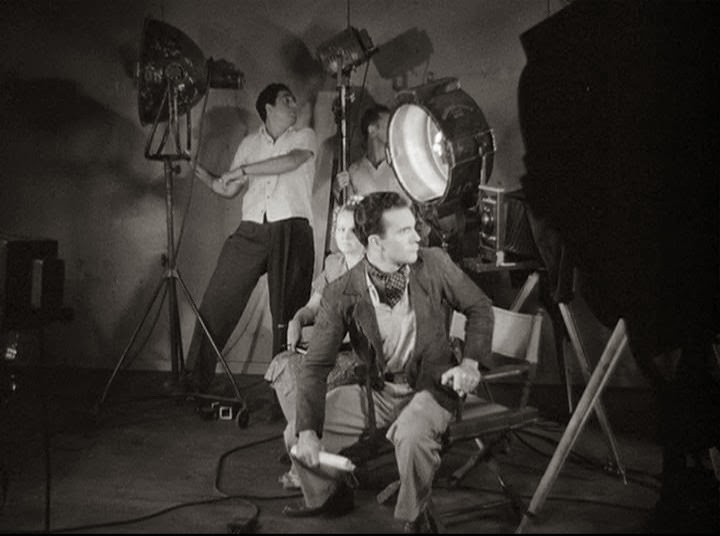 Side-note the third: The studio director whose take Porky spoils is Gerry Chiniquy, one of Freleng’s finest animators. 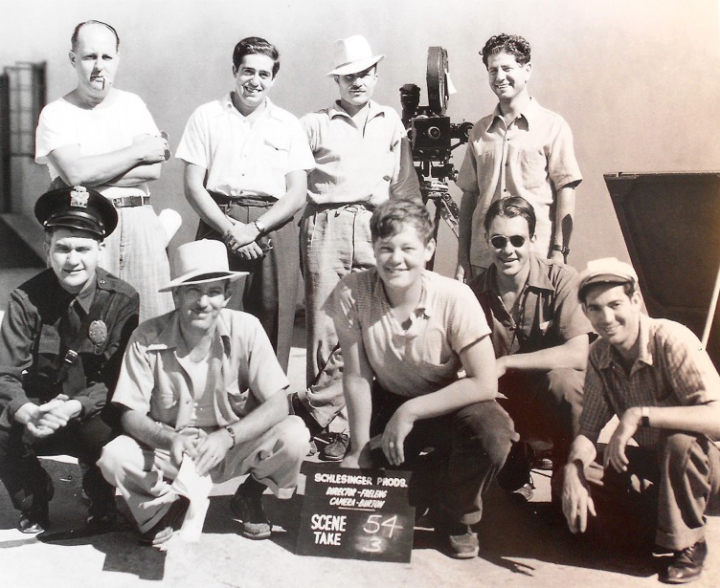 Side-note the fourth: That’s Mike Maltese, in the studio guard uniform. Freleng is next to him, in the hat.

The Tex Avery Influence: The Trial of Mr. Wolf (1941) In which the accused attempts to re-cast himself as the victim. 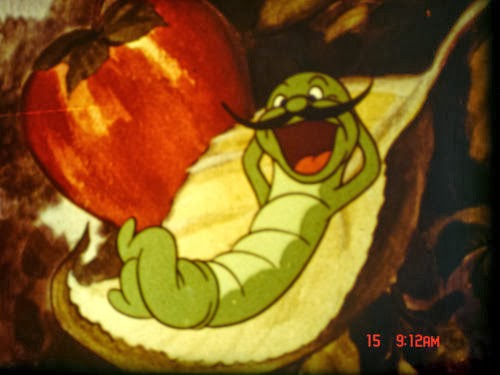 The Wacky Worm (1941) stars a caricature version of the then-popular radio comedian Jerry Colonna. The title of the worm’s second Freleng short, 1943’s Greetings, Bait was a pun on Colonna’s trademark, “Greetings, Gate!” One can only imagine with what puzzlement children today regard things like this.

Chuck Jones: “Actually, shooting motion pictures, including animation, and performing music are very similar indeed — one, impinging a successive series of varied sounds on the ear; the other, impinging a successive series of varied sights on the eyes. It is no coincidence then, it is just plain good sense, that Friz Freleng set down the timing of his films on musical bar sheets.”

The Hardship of Miles Standish (1940) I searched in vain for a cel from this very funny short, in which Elmer Fudd is John Alden, a Hugh Herbert caricature is Standish, and an ersatz Edna May Oliver is Priscilla. (“Love… speaks for itself, dear.”)

Best moment: A cross-eyed Indian whacks his compatriot over the noggin with his tomahawk. To an instantly recognizable waaaah-wah-wahwahwahwah horn solo on the soundtrack, the injured warrior clearly mouths the phrase, “Goddamn son of a bitch!”

In The Hare-Brained Hypnotist (1942), an early Freleng rabbit short, Bugs gets more than he bargains for when he puts Elmer Fudd under.

Jack-Wabbit and the Beanstalk (1943) features a giant who looks exactly like the one in Disney’s The Brave Little Tailor. Many of the gags were later appropriated (and improved upon) by Chuck Jones for his 1955 Bugs and Daffy short Beanstalk Bunny.

Pigs in a Polka. A beguiling 1944 short, one of Freleng’s concert-hall specialties. For some reason, this rather strange recurring dance-gag always makes me laugh.

… then puts the obnoxiously adenoidal Red (“I’m bringin’ a little bunny rabbit for my grandmother… ta have, see?!”) in the wolf’s place. That’s the voice of the great Bea Benedaret as Red. 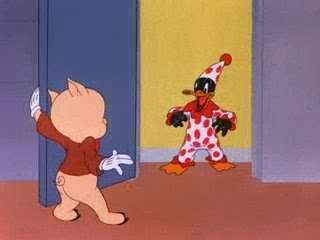 Yankee Doodle Daffy (1943) With Bugs Bunny in the ascendant, Porky was in decline. Teaming him with Daffy often made for memorable shorts. Here, Daffy corners talent agent Porky; the result is a gag-stuffed masterpiece.

Bugs Bunny meets a formidable foe in Freleng’s 1945 Hare Trigger. Bored with Elmer Fudd’s imbecility, Freleng turned what was essentially a self-caricature into one of his most endearingly dyspeptic creations.

A self-caricatured Freleng from the ‘50s. The red hair and diminutive size were not the only traits he shared in common with his greatest creation: Friz also had Yosemite Sam’s explosive temperament.

Herr Meets Hare, a war effort from 1945. Freleng’s previous anti-Axis satire, Bugs Bunny Nips the Nips, is brilliant, but deeply offensive. (Although it should be remembered that, during the war, even that gentle humanitarian Eleanor Roosevelt publicly referred to “The Japs.”)

Chuck Jones’ later masterpiece What’s Opera, Doc? clearly owes something to Freleng. It was Friz, in this short, who first came up with an oversized Wagnerian horse.

Baseball Bugs, Freleng’s marvelous 1946 cartoon with the rabbit up at bat, solo, against the terrifying Gas-House Gorillas. 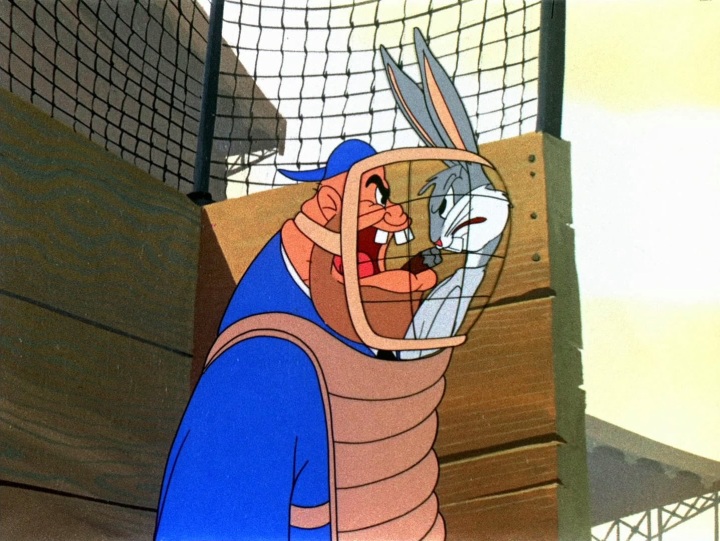 Baseball Bugs is, I believe, the first Bugs cartoon in which the rabbit outmaneuvers an opponent in a verbal joust by switching positions in mid-stream: The ersatz Ref begins by calling Bugs “Out,” and ends up warning him that, when he says someone is safe, they’d better not argue.

Look for this fence ad in the outfield: “Mike Maltese, Ace Detective.” The writers and animators who didn’t get official, on-screen credit often inserted themselves into the shorts this way.

Freleng’s Racketeer Rabbit (1946) featuring caricatures of two Warner Bros.’ mainstays, Peter Lorre and Edward G. Robinson, with Bugs as a ringer for George Raft. It also contains one of my favorite lines from a Looney Tunes short, courtesy of the great Michael Maltese: Robinson’s response to a set of curtains. (“Awww — they’re adorable!”) Guess you had to be there. 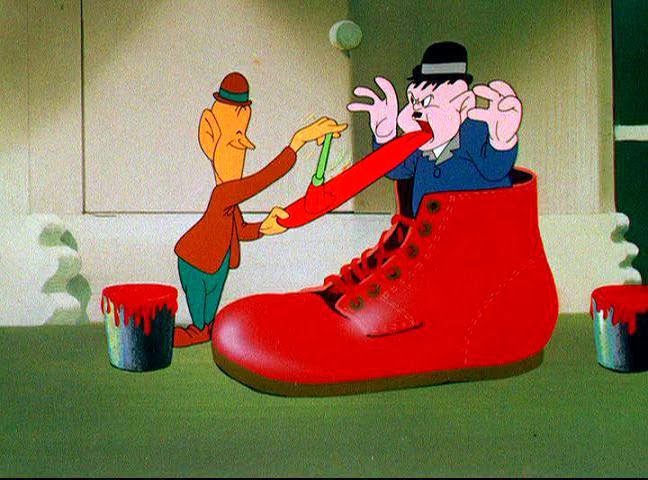 Holiday for Shoestrings, a charming fairy tale from 1946, includes a pair of shoemaker’s elves who resemble a certain well-known comedy team.

Rhapsody Rabbit (1946) Arguably Freleng’s most brilliant classical music-inspired short, with Bugs as a concert pianist bravely taking on one of Liszt’s Hungarian Rhapsodies. (Even the actual pianist was dismayed by the tempos Friz demanded.) The moment where Bugs turns to the camera and lifts his eyebrow at the audience, perfectly timed to the score, is one of the high-water marks of Looney Tunes animation. It also must have made a marked impression on Chuck Jones. 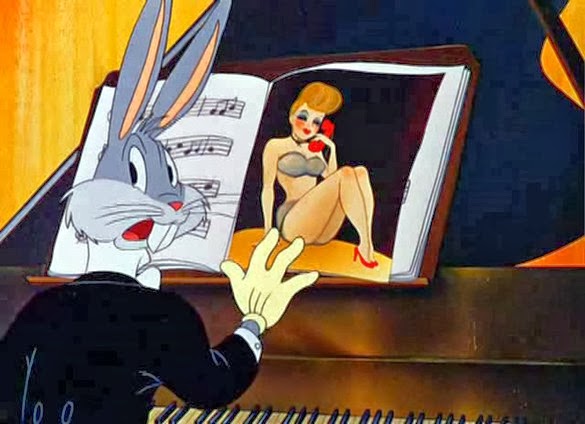 Rhapsody Rabbit. Ted Pierce and Mike Maltese wrote it, and Virgil Ross and Gerry Chiniquy are responsible for much of the short’s magnificent animation. 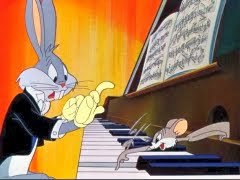 In a coincidence too pointed to be anything other than the result of intra-studio espionage, Hanna and Barbera prepared a Tom and Jerry cartoon that year that reflected Freleng’s Rhapsody Rabbit in nearly every way. They also won the Oscar for theirs. Need I add that it’s nowhere near as funny?

Rhapsody Rabbit. No less a figure than James Agee wrote (in The Nation) that this cartoon was “the funniest thing I’ve seen since the decline of sociological dancing.” 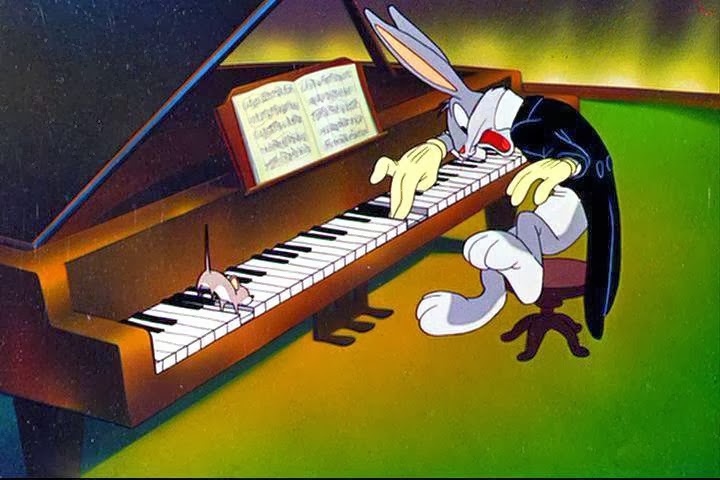 Rhapsody Rabbit. Bugs and the mouse inside the piano engage in a delightful, impromptu burst of boogie-woogie.