Mart Crowley died earlier this month at the age of 84. It is probably difficult for those born in or after the 1970s to comprehend this, but there was a time, and not so long ago, when homosexuality was so terrible a spectre that, even in the field of entertainment, where gay men were legion, there were only two ways to depict fags: 1) As comic, cowardly, limp-wristed prissy swishers who sold antiques, cut hair, designed clothing, squealed like schoolgirls and could always be counted upon to make the hero look like Victor Mature even if he was as wispy as Elisha Cook, Jr.; or 2) as vicious, conscienceless, sadistic/misogynist killers who had to be put down, preferably with as much brutality as could be mustered. Even our greatest, then-living playwright had to disguise his gay characters, or obfuscate their sexuality, ore pretend their sexual activity was shameful, from the ’30s right through the 1960s… and that at a time when the stage was otherwise 50 years ahead of the movies in what could be depicted, and discussed. In such an atmosphere, Mart Crowley’s 1968 play The Boys in the Band hit New York as a cultural tsunami; what was intended for five-performances Off-Broadway became a 1,000-performance run, the play was recorded in its entirety by A&M Records (Herb Alpert’s label; he was the “A”) and it was filmed, pretty much intact and with the same cast that played it on the stage, by William Friedkin in 1970. (Note the photo of the marquee above. So much for Friedkin’s possessive credit. Cinema Center knew it was a playwright’s movie.)

Crowley, whose friend Natalie Wood hired him as her assistant largely to give him time to complete the play, wrote about himself, and those he knew, in those antediluvian, pre-Stonewall days of the furtive closet in which the only public homosexual the wider society knew of was Truman Capote (and, because he didn’t say so and neither did anyone else, for attribution, some people probably weren’t even entirely certain about him.) While Michael, the play’s bitchy, self-hating central figure, might be thought of as a self-portrait, there was likely some element of Crowley’s persona in all the characters, some of men he knew and some (hold on to yourself) he simply made up. This, not to shock the many now who think that every writer, no matter his or her genre, is constantly engaged in autobiography, is what writers do.

Some felt The Boys in the Band was hopelessly dated when the Stonewall riots took place a year after the play premiered, but this is nonsense. Were the battles the Youngers faced in A Raisin in the Sun obliterated due to the 1963 March on Washington, or because the Voting Right Act was passed two years later? Did Judgment at Nuremburg eliminate anti-Semitism? Not that things didn’t get better, for many, and fast — too fast for the prevailing culture; nasty homophobic jokes and smears in the press and popular entertainment, and legislation in the public sphere, continued apace in the 1970s, but Allen Ginsberg, who witnessed the second night of rioting, famously observed, “You know, the guys there were so beautiful — they’ve lost that wounded look that fags all had 10 years ago.” The “boys” in The Boys in the Band all have that look, to one degree or another, even the exuberant flaming-queen Emory. Indeed, the late Doric Wilson, who was also there, later incorporated Michael and his friend and former lover Donald into his wonderful Stonewall play Street Theatre, where they whinge from the sidelines, their bitchiness about the participants camouflaging their fear that they might actually have to stop cringing and stand, if not proud, at least unafraid, before the straight world. 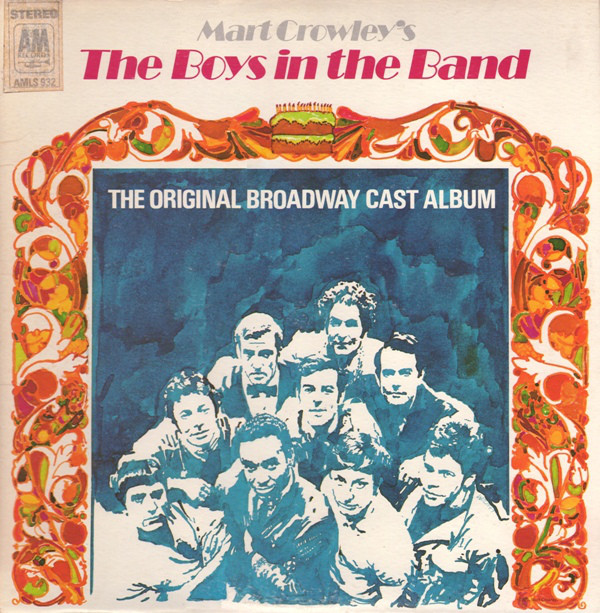 Crowley never had a hit like The Boys in the Band again, but while I’m sure he would have enjoyed one, he almost didn’t need it. (Orson Welles to Boganovich: “Peter, you only need one.”) His comic drama stands as the embodiment, bold and utterly, un-apologetically queer at a time when men were routinely entrapped, and arrested for so much as dancing with each other in a bar, of a time and place, just before some form of liberation became possible. When I discovered the LP at 17, it took the top of my head off. As I had just emerged from my own sexual confusion, it was astounding to hear through my headphones this stageful of men being themselves, and flagrantly: Dishing full-throatedly. Discussing matters of intimate sexuality as if there were no straights in the audience, or within twenty miles of their voices, with deliciously obscene abandon and, by yes, camping it up. And indulging in badinage that even one of my tender years recognized could bear comparison to the wit of Wilde and Coward. There are few modern plays (or movies, for that matter) with as many quotable lines, and you can probably number those on two hands with some fingers left over.*

Harold: Who is she? Who was she? Who does she hope to be?

Michael: In spring a young man’s fancy turns to a fancy young man.

Donald: Thanks to the silver screen your neurosis has got style.

Harold: Give me Librium or give me meth!

Emory: If it’s the one I met, he’s about as straight as the Yellow Brick Road.

Harold: Michael doesn’t have charm, Donald. He has counter-charm.

Cowboy: I lost my grip doing my chin ups and fell on my heels and twisted my back.
Emory: You shouldn’t wear heels when you do chin ups!

Harold: What I am, Michael, is a 32 year-old, ugly, pock marked Jew fairy, and if it takes me a little while to pull myself together, and if I smoke a little grass before I get up the nerve to show my face to the world, it’s nobody’s goddamned business but my own. And how are you this evening?

Cowboy: I’m not a steal. I cost twenty dollars.

Michael: It’s not always the way it is in plays. Not all faggots bump themselves off at the end of the story!

Michael: As my father said to me when he died in my arms, “I don’t understand any of it. I never did.” Turn the lights out when you leave. 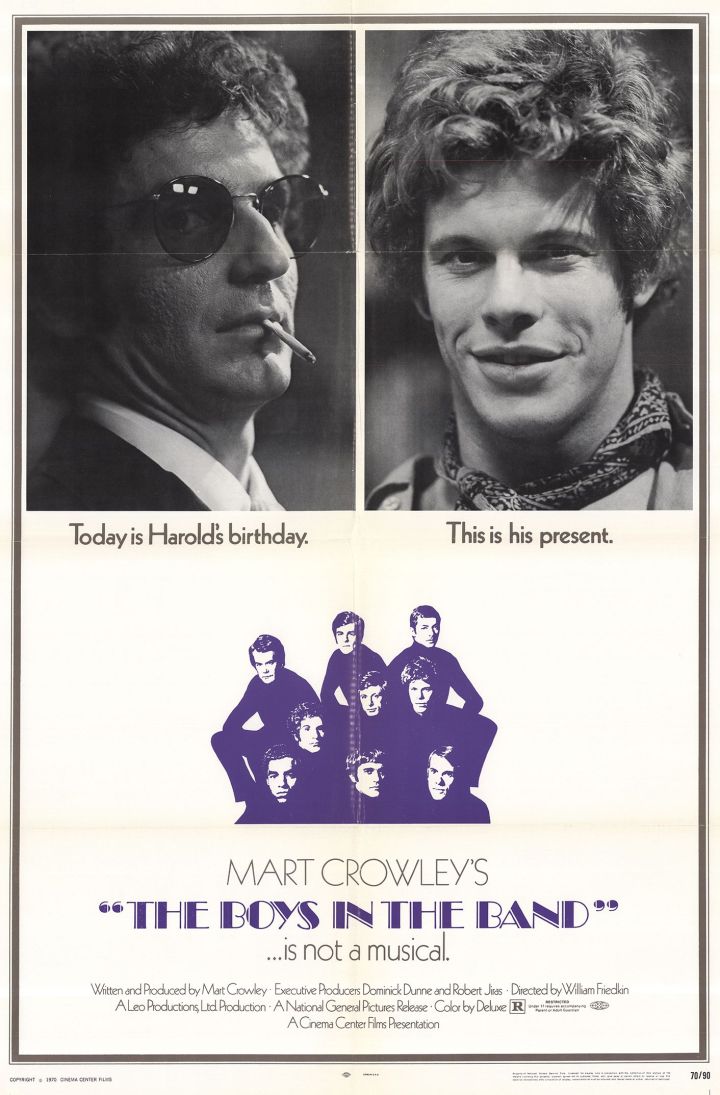 Not everyone loved the play, or the movie. Pauline Kael likened its characters to “the gathering of bitchy ladies in The Women, but with a 40s-movie bomber-crew cast: a Catholic, a Jew, a Negro, a hustler, one who is butch, and one who is nellie, and so on. They crack jokes while their hearts are breaking.” But better this than the sort of reflexive, prim inanities one reads about the play now on pages like Wikipedia, where Crowley’s entry refers to The Boys in the Band as his “gay-themed play.” Gay-themed?!? This, about a piece of theatre whose cast last is entirely composed of gay men (and one possible closet-case) who talk almost exclusively about matters of note to homosexual men, and in which sexuality, and the characters’ attitudes toward it, is the overriding concern!

Crowley may have been, to a degree, a victim of his own success. The play that made him famous also limited him (this was not, after all, the time of “out” gay screenwriters winning Academy Awards) as the times marginalized the work itself. And what really dated the play was not Stonewall, but the decade that followed it: By the time we had gotten through Anita Bryant’s crusade in Florida, the Briggs Initiative in California, the murders of George Moscone and Harvey Milk in San Francisco and such ancillary items as a deeply biased CBS News “special report” that in a mere hour managed to slander every gay man and Lesbian in America, that wounded look Ginsberg referred to had been replaced by one of utter fury.

And, lucky us, AIDS was waiting in the wings.

Having come out the other side of that devastation,† which I remain persuaded was CIA in origin (oh, not aimed at queers — we were just collateral damage — but at Africans) the turn of the century seemed the right time to re-examine Mart Crowley and his most famous play. It was re-published, along with the lesser-known A Breeze from the Gulf (a sort of unofficial, autobiographical prelude to Boys) and another, For Reasons That Remain Unclear, and carrying a new introduction by the author, in 1996. It was also recently given a somewhat starry Broadway production with a cast entirely composed of “openly gay” actors (whatever that means; who ever identifies as “openly straight”?)‡ including Jim Parsons and Zachary Quinto. The theatre writer and critic Peter Falicia believes the play helped inspire Stonewall, which I beg some leave to doubt, and that it altered the attitudes of many heterosexuals who saw it, which is more likely.

Mart Cowley did of a heart attack following open heart surgery on 7 March, 2020. There were times in the years after the play and movie when, as his old friend (and onetime “Boy”) Laurence Luckinbill notes in American Theatre, Crowley despaired, and nearly succumbed. But he survived to 84 when many of his generation (and, later, my own) were dead before 44. And what will be more important to future generations, his most well known play survives. As a period-piece perhaps, or even an object lesson, but either way The Boys go on. This one-time, fumbling, uncertain gay adolescent now sends his thanks to a man he never met but whose characters still live within his ageing breast. Thanks for turning the lights on, Mart/Michael, and for keeping them on when you left.

Crowely at the time of the movie.

*My list, for what it’s worth (and with minimal thought), of ten: The Importance of Being Earnest, Pygmalion, Private Lives, A Streetcar Named Desire, Waiting for Godot, Who’s Afraid of Virginia Woolf?, A Man for All Seasons, The Odd Couple, 40 Years On, Angels in America.

†Although nearly a million people still die from HIV/AIDS every year — 13,000 of them in America. That’s hardly a victory. But its terror has largely receded here, if only among those not affected.

‡Please don’t bother telling me it’s about being “out.” I came out as a teenager, in 1979. But I don’t refer to myself as being “openly gay” any more than I identify as “openly Caucasian,” or “openly Scots-Irish.” And yes, I recognize the difference. I’m not quite a moron.

Text (other than Crowley’s dialogue) copyright 2020 by Scott Ross