John Huston famously wanted to make an adaptation of the 1888 Kipling story in the 1950s, to star Bogart and Gable as those incorrigible adventurers “Peachy” Carnahan and Daniel Dravot. He was ultimately persuaded to cast British actors in British roles — which seems so obvious an idea its efficacy shouldn’t have had to be pointed out to him — and got thespic perfection from Michael Caine and Sean Connery… although, somewhat astoundingly, Caine was slanged at the time for being wholly over-the-top.

Danny is astounded by the size of Peachy’s ruby, which dwarfs the monster he’s unearthed.

I saw this one on its release and it holds up beautifully four and a half decades later, even if the occasional condescension (the watermelon-eating Indian on the train, for example) and the sticky Imperialist sentiments which nettled me at 14 bother me even more today. Huston and his co-scenarist Gladys Hill do more than honor the source: They make its author one of the stars, in Christopher Plummer’s wholly convincing portrayal. (He was a last-minute substitute for Richard Burton, but I can’t imagine Burton besting Plummer in the part.) The movie has a sweep that is all the more effective now for being real, not computer-generated; the cinematographer was the great Oswald Morris, who in collaboration with Huston provided the luminous images for Moulin Rouge (1952), Beat the Devil (1953), Moby-Dick (1956) and Heaven Knows, Mr. Allison (1957) as well as providing the pictorial splendors for The Guns of Navarone (1961), Lolita (1962), The Hill (1965), The Spy Who Came in from the Cold (1965), The Taming of the Shrew (1967), Oliver! (1968), Goodbye, Mr. Chips (1969), Scrooge (1970), Fiddler on the Roof (1971), Sleuth (1972), Equus (1977),  The Seven-Per-Cent Solution (1977), Just Tell Me What You Want (1980), The Dark Crystal (1982) and that most photogenic of John Bond epics The Man with the Golden Gun (1974). But The Man Who Would Be King is not a postcard-picture: However impressive the scenery (Morocco standing in for the Kafiri region of Afghanistan) it’s a desolate kingdom this pair is seeking, perched between forbidding mountains and the desert’s austerity. By the end, Peachy’s desire to make off with the treasure of Sikandergul makes one hell of a lot more sense than Danny’s decision to rule like Alexander, if only because the former at least indicates a possible change of scenery.

Whatever the original reviews, I don’t see how either Connery or Caine could be bettered. Each has the humor of his character, as well as that often charmingly formal solemnity which renders the pair’s seriousness of intent at once amusing and grave. And while it’s true that Caine is called upon to be more overtly humorous than Connery, even wildly funny (I’m thinking particularly of the “One, two, three” training scene) he is no less capable than his co-star of gravitas. I think he gets the quiet madness of the character in the framing sequences exactly right, as well as the scenes in the final third of the picture in which he begins to feel Dravot distancing himself from his friend and reacts with, first, soft hurt; later, justified rage; and, at the last, stoic comprehension. And he’s beautifully matched by Connery, in whom the rich Kiplingesque absurdities roll over the tongue like a savored entrée, yet for whom the eventual hubris, and the graceful courage with which its consequences are met, are entirely correct. 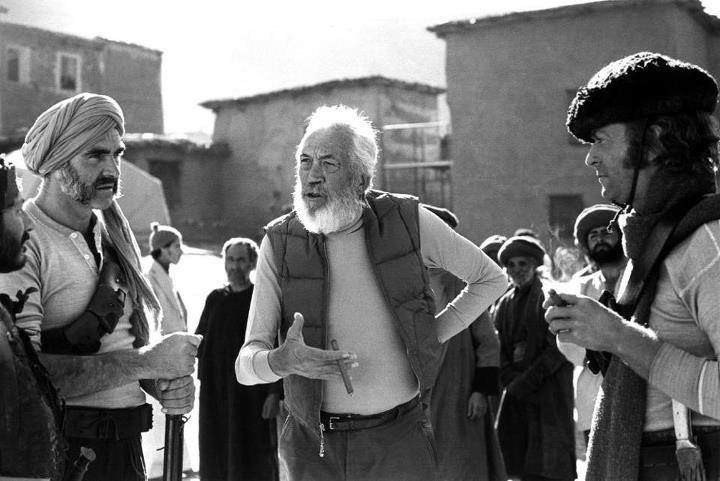 One of the more surprising pleasures of the movie is its rich score by Maurice Jarre, never a favorite composer of mine, Lawrence of Arabia notwithstanding. His work tends toward either the annoyingly esoteric (Is Paris Burning?, Ryan’s Daughter, The Mosquito Coast and the deeply perplexing Witness: Why the synthesizer in a story set among the Amish?) or romanticism so lush as to become self-parody (Doctor Zhivago, Gorillas in the Mist). Only occasionally did Jarre fulfill the promise of Lawrence, as with his klezmer-accented work for Paul Mazursky on Enemies, a love story and his splendid compositions here, anchored to the Irish song “The Minstrel Boy” much as he tied Lawrence to Kenneth Alford’s war march “The Voice of the Guns.” (Jarre combined the tune for “Minstrel Boy” with Reginald Heber’s lyrics for the rather frighteningly militaristic hymn “The Son of God Goes Forth to War,” a song that rivals “Onward Christian Soldiers” for sectarian bloodthirstiness.) Elsewhere Jarre catches the warm rhythms of India, the sere wastelands of Kafiristan and the conflicting passions of the characters, nicely complementing Huston’s images without competing with them for our attention.

The eyes of age: Karroom Ben Bouih’s as the Kafu Selim

The Man Who Would Be King is as demonstrably a John Huston picture as The Treasure of the Sierra Madre for, as so often in Huston, the quest ends in disaster, yet the pursuit itself reveals his characters’ essences: Peachy’s for personal gain, Dravot’s for something outside himself, yet withal in both resides a decency belied by their roguish miens. They even attain a kind of rough poetry, as with Daniel’s apology to Peachy, and the mad Carnahan’s description of Dravot’s fall — there’s nothing like it in Kipling, and it’s as memorable in its modest way as Bogart’s Shakespearean paraphrase at the end of The Maltese Falcon. Huston and Hill also expand, intelligently, on the Masonry of the Kipling, bringing it to a logical, if grandiose, conclusion. When Huston stages an epic sequence, as in the first of his heroes’ battles, he makes it intensely memorable by stopping it before it can truly begin, as both sides wait in prayerful solicitude of the line of elderly priests walking between them as later, in the midst of the protagonists’ intended escape, their treasure, like that of the prospectors in Sierra Madre, dissolves to nothing, here spilling from the horses’ backs to drop clangingly down the steep sides of a mountain hill.

Son of Alexander: Jaffrey, Caine and Connery at the moment of revelation.

Whether by dint of his nature or the landscape, Huston’s approach to an epic structure is intimate; we remember the faces as much as the big set-pieces: Connery’s, Caine’s and Plummer’s, but also Saeed Jaffrey’s as the sweet and absurdly loyal Billy Fish, Shakira Caine’s as the ethereally beautiful and terrified Roxanne (the terror was real — she wasn’t an actress, and didn’t know what to do), Doghmi Larbi’s as the cowardly chieftan Ootah, and, especially, the centenarian Karroom Ben Bouih’s as the ancient priest Kafu Selim. The apt and, where necessary, exquisite art direction by Alexandre Trauner with Tony Inglis and Peter James is an immeasurable aid (Trauner designed Danny’s crown) as is Russell Lloyd’s alternatively leisured and kinetic editing, and Edith Head provided her usual supple costumes — like Huston’s own designs, always firmly in character.