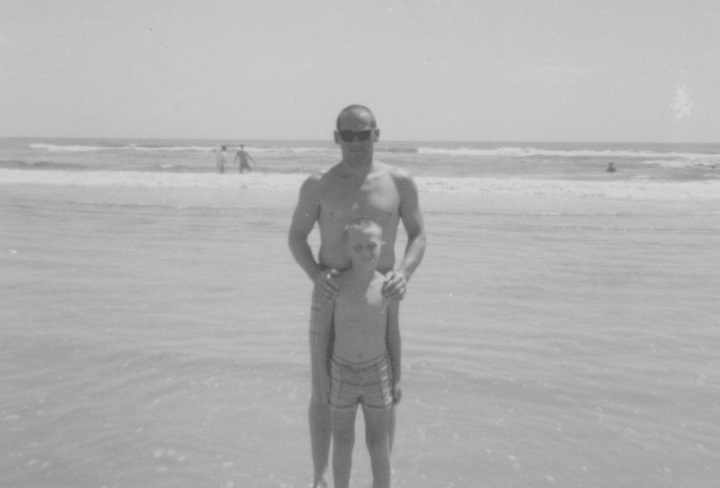 My father with me, when he still enjoyed my company. New Smyrna Beach, Florida, July 1968.

[Note: I am in the process of closing out the two blogs I created before this one and am transferring their contents here, so please bear with the sudden appearance of these “old” essays &cet.]

Tomorrow, 18 January, marks my 53rd birthday. And no, that announcement is not me fishing for good wishes; I accept the date because I must, not because I’m happy about it. However, last week’s uncommonly cold weather in North Carolina caused me to think of my father’s circumstances the day I was taken home.

There was, I was once told, a wind-chill factor of 20 below in Canton, Ohio the morning I exited my mother’s womb. Had I known, I might have climbed back in. At the time, my parents had an old VW Beetle. A convertible, no less. (In Ohio. What the hell were they thinking?) They, and my sister, were living in the upstairs apartment of an elderly widow, Mrs. Claire Reed, who lived downstairs and with whom we maintained fond contact long after we moved into our own, rented house when I was three. Her gentleman friend, sweet old Ed McQuisten, was so constant a presence at Mrs. Reed’s that the two became linked in our vocabulary. One seldom spoke of Mrs. Reed, or of Ed. They were as one entity — as one word: “MrsReedandEd.”

The day Dad was to bring Mom and my tiny self home from Aultman Hospital was brutally cold… and the heater on the VW Beetle had given up the ghost. It also chose the morning my father was on his way to pick us up to simply die along the side of the road. Dad opened the hood, determined the problem, and set off on foot toward an auto parts store he’d passed along the way. As if sent by a divine providence, Ed happened along. He was more than happy to take Dad to the parts supply store, wait for him to make his purchase, and drive him back. He offered to stay until the engine was going again but my father, whether with bravado, from humiliation, or out of some misguided faith in his own mechanical abilities, assured the old man that he would be fine.

Ed drove away. Dad replaced the faulty part, got in behind the wheel, turned the key… and probably either groaned, wept, or, knowing him as I did, cursed a veritable blue streak as it failed to engage. Re-checking the engine, he determined that he had misdiagnosed the problem, and trudged back through the bitter cold to the parts supplier.

My father made it back to the car, and replaced the part in question; what it was I no longer remember, and Dad is dead. I was brought home in that heat-less Volkswagen, bundled so thoroughly I could not be seen, but intact and, despite the odds, physically no worse for what must surely have been an uncomfortably Arctic drive. I don’t know whether Mrs. Reed imbibed, but I hope she served, if not hot toddies, at least some piping mugs of cocoa.

As is, sadly, so often the case, at least in America, I was never really close to my father. I suspect he liked his children best when they were small, and could be played with, like soft, animated toys. It was only when they became more definite people that he lost, if not interest, then outward affection, at least for me. I also believe that some fathers become aware, in an subconscious manner, of their son’s homosexuality during a boy’s early development and distance themselves accordingly (thus ironically providing fodder for all those boring, now-debunked, clichés anent the distant father/overbearing mother.)

He was, I think, too much like his own, hated father — although, as a friend pointed out recently when I spoke about the two, Dad must at least have fought that demon in himself, to a degree. In any case, although he had my paternal grandfather’s temper (and, I suspect, was a victim as well of the same chronic depression that I am now certain affected the old man and that currently blights the life of his father’s grandson) my father was never as physically abusive as his dad. Still… even one nose-bleed-inducing smack across the face is more than sufficient; from the age of 9 I never again fully trusted, or felt entirely comfortable with, my father.

My mother used to take pains to tell me that my father was proud of me. It would have been nice, just once, to have heard that from him. Be that as it may, I’m not ungrateful: Parents sacrifice much for their children, more often than not without complaint. When it’s below zero, in January, I think of that young man with the un-heated Beetle, braving the killing Ohio chill twice to bring his son home.