“You faggots are revolting!” — Cat-call at the first gay parade in New York, in 1970. To which an anonymous wit shouted back, “You bet your sweet ass we are!”

For the record, your correspondent was eight years old that day, and would not learn of the significance of Stonewall for some time. Herewith, a few signposts leading to, and from, 27 and 28 June, 1969.

Below: The late Frank Kameny in Philadelphia, in 1965. 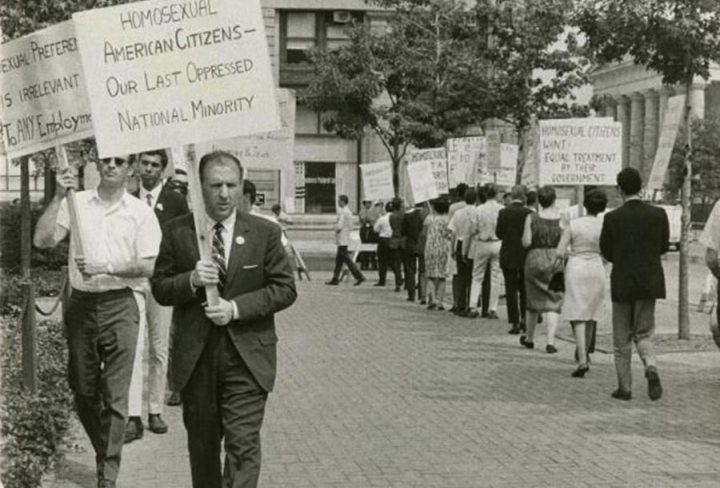 Fired from his government job in 1957 as a “sex pervert,” he took his case to the Supreme Court in 1961, eight years before Stonewall. One of the most courageous men of his time.

The Lesbian rights pioneer Barbara Gittings, in the early 1960s. 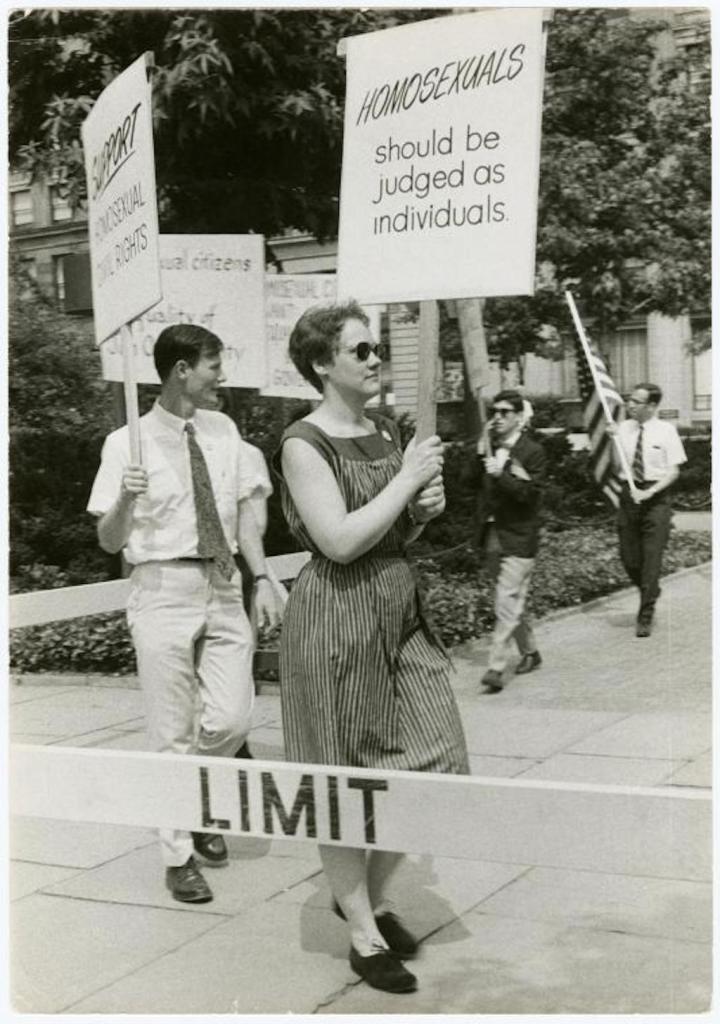 The Black Cat Tavern in the Silverlake district of L.A. On New Year’s Eve 1967 — a year and a half before the Stonewall uprising — patrons rioted when the cops arrested and brutally beat its patrons. The once-great, now insipid, magazine The Advocate arose from this infamous event. Why do so few of us know it happened? 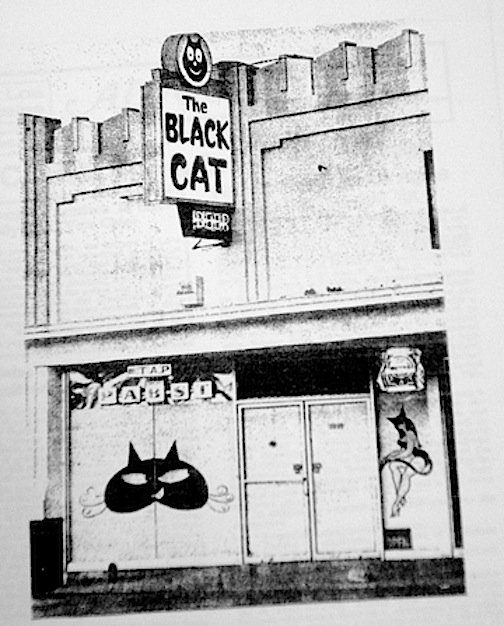 Below: Protests at the Black Cat. 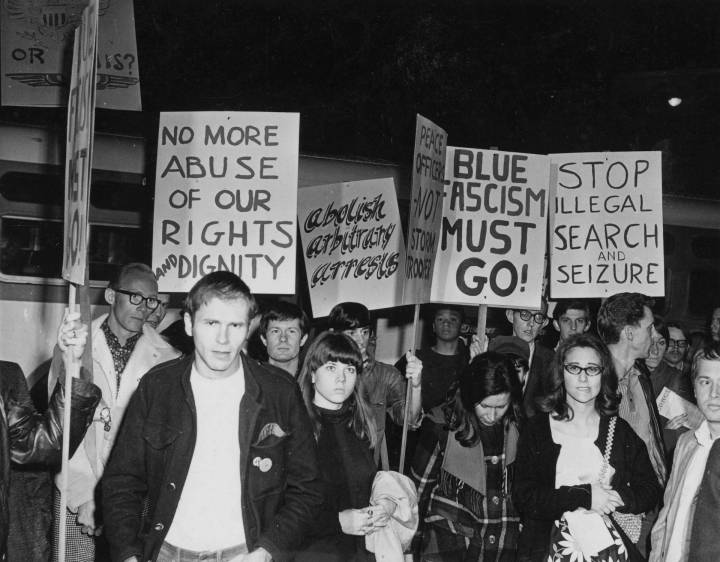 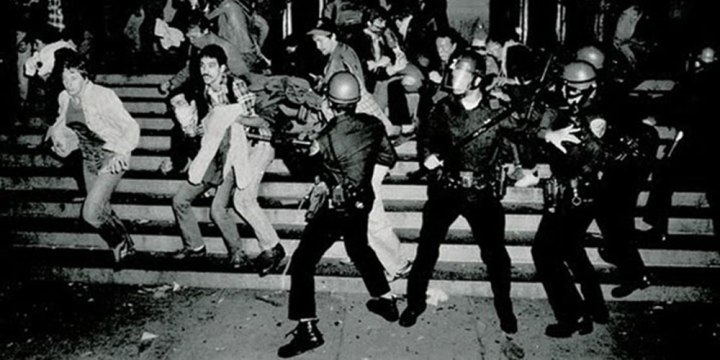 While many of the patrons of that Mafia-controlled bar were black or Latino, some were drag queens, and Lesbians were represented as well, it was a decidedly mixed crowd, in terms of race, of gender, and even of gender-identity — precisely the sort of polyglot gathering we now take as a social ideal. And yes, Virginia, despite the historical revisionism now masquerading as fact and perpetuated by people who weren’t even alive in 1969, there were plenty of white boys there. Even granting the participation of Marsha P. Johnson and Sylvia Rivera and others who perhaps did not consider themselves transgendered at the time of the riots but who later proclaimed it, for 20-somethings today to make the absurd claim that the event was precipitated solely by black trans women (as I saw more than one self-righteous twit proclaim on the release of the ill-considered 2015 Stonewall movie*) is as false as the usual popular whitewash which attends so much American history and which consistently elevated whites to sainted status (even in the creation of Jazz!) It serves neither social justice, nor history, to view the Stonewall riots solely through the bent lens (to use a pointed metaphor) of 21st century racial and gender identity politics. The inclusive patronage of the Stonewall — and, by extension, of the crowd that grew outside that evening and the following night — is emblematic of the movement, and of the reasons so many later embraced Gilbert Baker’s rainbow flag.†

Below: Young black, Hispanic and Caucasian patrons, including two drag queens (or possibly three; I don’t know about the boy at top center) outside the Stonewall. 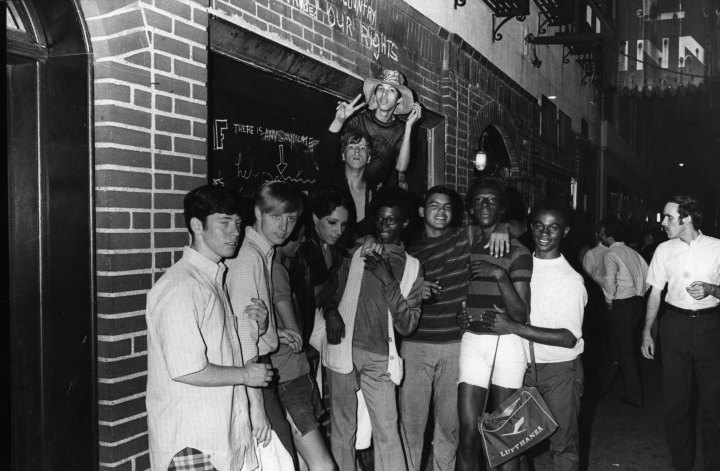 Gay “street kids,” some as young as 14, were also represented that night and the following evening. As has been pointed out, they lived on the edge of death anyway, and had nothing to lose by fighting back. 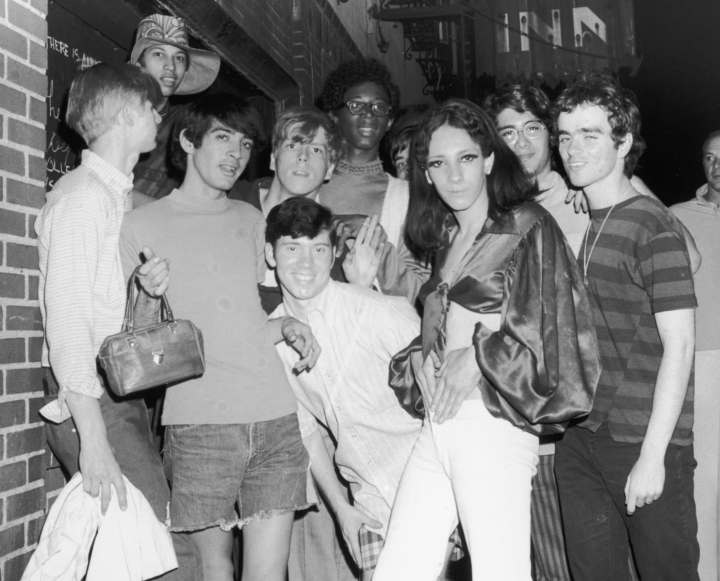 Some accounts suggest a butch Lesbian (or even a straight man…) may have instigated the riot. But the Village “street kids” were, understandably, the angriest, and they’d had it with the cops; they were likely the first to resist. 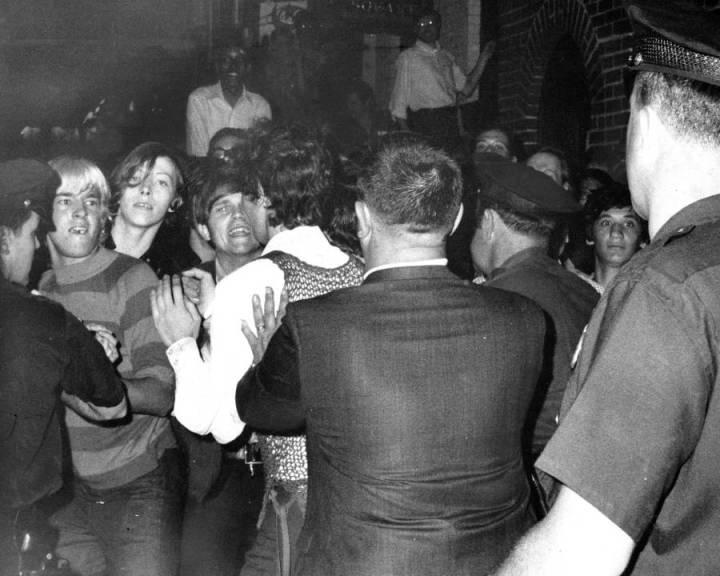 How the New York Times chose to cover Stonewall:
That headline’s pro-cop bias was a love offering to the gay community of Greenwich Village compared to how the Sunday News chose to cover the event: 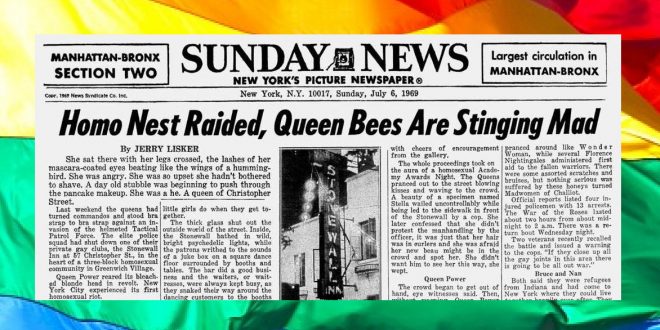 Below: The playwright Doric Wilson, who was there. Street Theatre, Wilson’s dramatic fantasia about Stonewall, should be required reading (or viewing, if you can find a production) for every intelligent homo boy or girl. 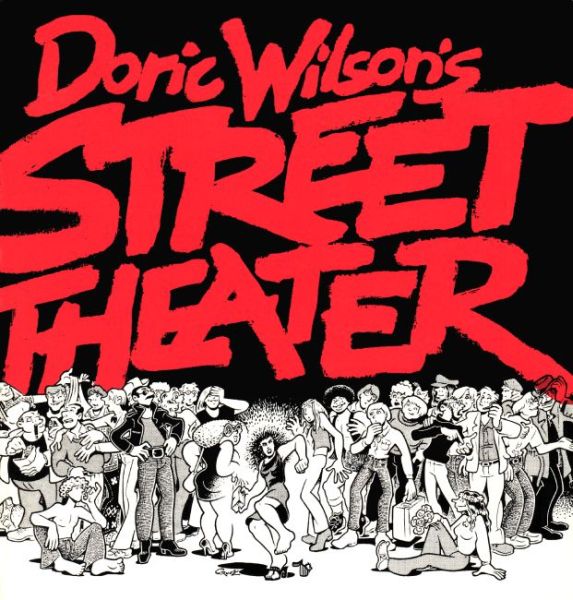 Poster art for the TOSOS production by the great Howard Cruse. Note the figures based on Mart Crowley’s Boys in the Band characters Michael and Donald at left. They represent the generation most determined to be un-affected by, if not indeed actively opposing, what happened that night in the Village.

Edmund White was passing by that evening as well, and took careful note. As he later said to David Carter, “Everyone’s restless, angry, and high-spirited. No one has a slogan, no one even has an attitude, but something’s brewing.” 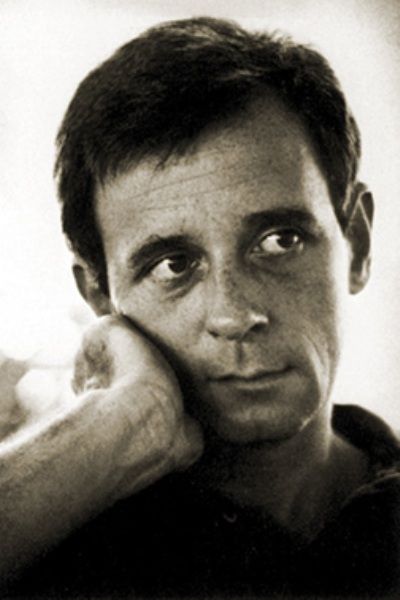 One of the first posters of a new movement, if not the first: 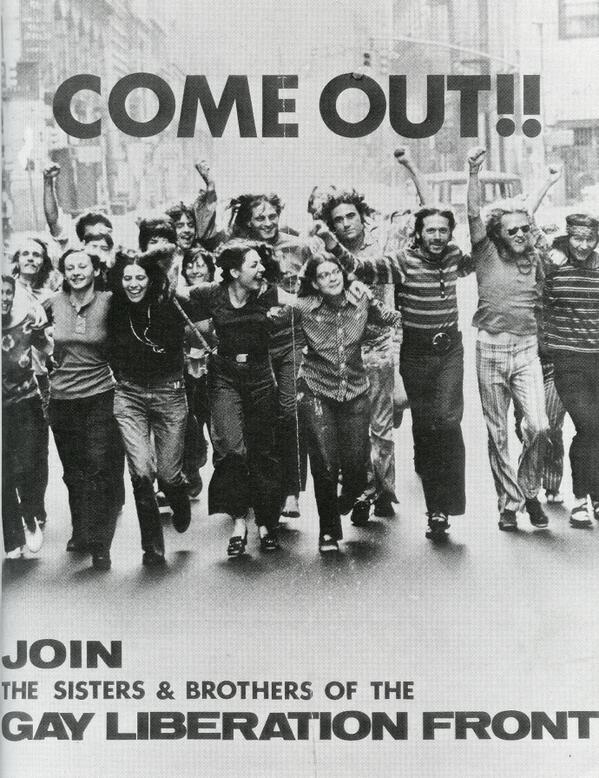 The late — and how gay men of my generation tired of using that phrase for the many AIDS dead — Vito Russo, an early activist whose groundbreaking book The Celluloid Closet, marrying two of my chief interests (movies and homosexuality) rocked my world in 1981.

Finally, to the legions of fashionable incrementalists on the left generally — and in the Democratic Party particularly — who believe we must always take baby steps and never offend or inconvenience anyone, this reminder: Meaningful social change only happens when there is direct action. While that does not necessarily mean violence (think Rosa Parks) it should be kept in mind that, had the participants at Stonewall waited to be patted on the heads and called good little boys and girls by the heterosexist Über-culture, we’d still be prohibited from dancing with each other in public.

They didn’t ask that night. They demanded. And everything since has flowed from that. A lesson we need to re-teach ourselves. To quote a murdered politician, “Those who make peaceful revolution impossible will make violent revolution inevitable.”

It was not a Hamptons cocktail party. As a popular meme has it…

* Itself unnecessary, as the late Nigel Fench had already made a very fine Stonewall, based on Martin Duberman’s book, in 1995, which focused on an interracial couple (one of whom was a cross-dressing Latino) and which I doubt any of these carping, identity-blinded Millennials have ever heard of, much less seen.