Very probably, the last thing one should do if one is a slave, as I am, to chronic depression is to either read a Dickens novel, or view the adaptation of one.

Why I chose this moment finally to sit down with the eight and 1/2-hour Royal Shakespeare Company Nicholas Nickleby I really can’t say, except that I’ve had the boxed set of DVDs for years, the depression longer, and I’m not getting any younger. Still… If one has any sensitivity at all, then meandering through Dickens is an act virtually guaranteed to exercise it; when your emotions are raw, close to the surface, and crying jags come easy, it’s going to be a trial. And assaying this particular Dickens novel is just asking for it.

Knowing the text likely makes it even worse, and Nicholas Nickleby has been a part of my cultural life for over three decades now. I did not see the original London or Broadway productions, but I certainly remember the Time magazine cover story and the attendant controversy over its then-exorbitant $100 ticket price, which now seems the veriest pittance. When it was taped for British broadcast and no American network would touch it, Mobil, to its eternal credit, picked it up and ran it in syndication, over, if memory serves, four consecutive nights. I can still vividly recall the excitement with which I waited to partake of each successive evening’s installment, and the nearly complete satisfaction the program gave me. In the interim came the surprisingly accomplished 2002 movie version, a veritable Secretariat of the cinema by way of contrast, one that somehow managed to encompass the narrative in a mere two hours and 12 minutes. About a decade ago, I finally cracked the novel itself, whose length had always intimidated me. It was a splendid experience, although I did long, finally, for it to end; ennui sets in around the 900th page of almost anything.

Last week it all came full-circle, as I revisited the television edition. I knew the tears would flow and, in my present state, all too copiously. How could they not, what with Dickens’ mastery of emotional manipulation, exacerbated by the magnificence of Trevor Nunn and John Caird’s resolutely powerful and magnificently theatrical staging, and pushed through the histrionic stratosphere by David Threlfall’s astonishingly moving Smike and the pluperfect Newman Noggs of Edward Petherbridge?

I recognize in Smike the author’s perennial favorite, the child or youth (usually, but not always, a boy) smashed, or nearly so, by the endemic Victorian system of, on the one hand, callous indifference and, on the other, active collusion in his destruction. We see him in Oliver Twist, in David Copperfield, in Pip, in Jo the crossing-sweeper and, on the distaff side, in the Littles, Nell and Dorrit: Sometimes triumphant, sometimes doomed, yet always striving against insuperable (when not downright malignant) odds. Smike is, in his way the ne plus ultra of the type: Not only shockingly poor, ill clothed and ill fed nor even merely physically crippled but mentally and emotionally damaged, seemingly beyond repair… and utterly beyond resistance to the emotionally susceptible. And, in my heart of hearts I know that Newman Noggs is, like the impossibly decent Cheeryble brothers, too good to be true. But I can’t imagine not being moved by the performances of Threlfall and Petherbridge.

Threlfall does miracle work with Smike, somehow (and even granting that the actor augments the character’s mannerisms well beyond Dickens’ less extreme description) never asking for pity no matter how piteous the character’s physical tribulations and emotional woes, or how pitiless the vicissitudes that attack him. It is, I think, that very resolution and restraint which make him so unutterably heartbreaking.

The great Edward Petherbridge as the incomparably endearing Newman Noggs.

As Noggs, Petherbridge’s every gesture and remark is perfection itself. If ever a character was perched on the precipice of manipulative self-pity, it’s Newman Noggs. Petherbridge has a way of seeming almost casually ironic, as if Noggs’ bibulousness has so simultaneously slowed and sped up his normal reactions that his sarcastic asides and small, bitter observations are barely perceived by his listeners, seemingly uttered without rancor and, indeed, with a kind of self-effacing apology. Timid yet sardonic, incalculably decent but neither overly nor even overtly sweet, he embodies the infinite hope of the essentially hopeless.

In this production, even the impenetrably cold Ralph Nickleby is moving, especially in John Woodvine’s stunning performance. So too, against all odds, is Emily Richards’ Kate Nickleby. The novel’s Kate is less a full-bodied character than a set of Victorian poses; she’s Virtuous Young Womanhood hideously importuned and victimized, and she reads as the literary equivalent of all those damsels in distress that render much silent movie acting of the early years so absurdly fustian. (And which Debbie Reynolds memorably poked fun at in Singin’ in the Rain.) Edgar, Nunn and Caird come in for some of the credit here, I suppose, but the achievement is, ultimately, Richards’. Her Kate is intelligent, stalwart, brave, despairing… but never bathetic.

Ben Kinglsey originated the pivotal role of Whackford Squeers, the appalling Yorkshire schoolmaster of Dotheboys Hall, at the RSC. By the time of the taping, Kinglsey was, due to his performance as Gandhi, a major movie presence; in his place was the alternately hilarious and terrifying Alun Armstrong. The protean Bob Peck is, astonishingly, equally effective as the uncouth yet decent John Browdie and the genteel and infinitely damnable Mulberry Hawk. Not only is he virtually unrecognizable as the same actor, his very vocal timbre alters: First deep, warm, resonant and full of bonhomie (Browdie) then high, cold, sneering and filled with malice (Hawk). It is Hawk who is perhaps the most puzzlingly Iago-like character in Nicholas Nickleby; his every impulse is to the destruction of others, for its own sake, far above the lure of the pecuniary. Even Ralph is more explicable. But as thoughtfully ironic double casting, Peck’s contrasts could not be sharper. 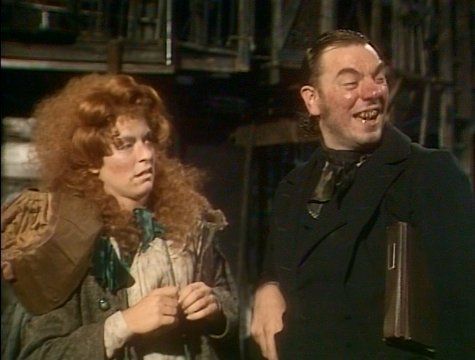 A face only a father could love: Suzanne Bertish as Fanny, with Alaun Armstrong.

The same holds true for Suzanne Bertish, who makes a splendidly spiteful Fanny Squeers and a charming Miss Snevellici, both ardent and, ultimately futile, suitors of young Nicholas. Lila Kaye is adorably hammy as Mrs. Crummles and a scarifying termagant as Mrs. Squeers. Of the nominal villains, Janet Dale’s mercurial Miss Nagg is nicely complimented by her hysteria as the absurd Mrs. Wititterly, while Nicholas Gecks’ Lord Frederick Verisopht is the most beautifully delineated of Kate’s tormentors. His features soft, sensual and Byronesque, his manner languid and foppish, he is seemingly indifferent yet becomes the single character who most effectively stymies the machinations of Hawk, at the cost of his own life, which he relinquishes with sad, manful irony. And, being me, I must also note the presence, in several small roles, of Stephen Rashbrook, the most boyishly beautiful of the male actors in the ensemble. He quite literally took my breath away every time the camera caught his almost ethereally lovely face.

Stephen Rashbrook, who does not play a vicar in Nicholas Nickleby. 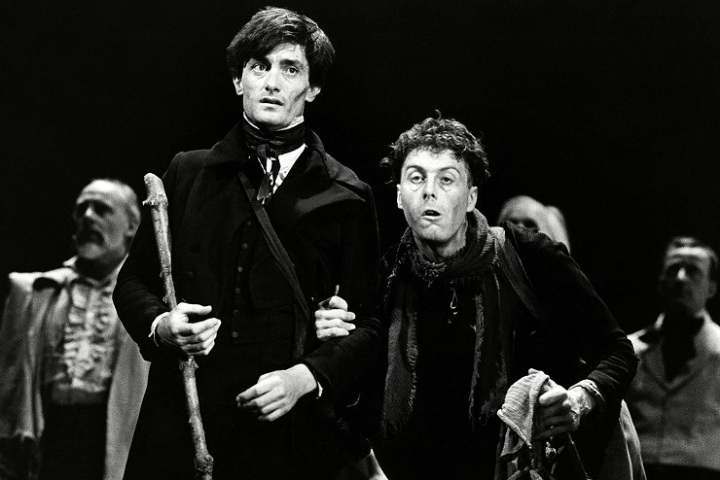 Roger Rees (Nicholas) and David Threlfall (Smike) on the journey to Portsmith.

As Nicholas, Roger Rees seems less efficacious to me now than he did in the early 1980s. Too much of his performance is pitched on sheer nerves, his limpid eyes always threatening to overflow, his infrequent outbursts of rage muted rather than enhanced by the emotionalism he displays throughout. It must be a difficult role to get right, and I do not mean to imply that Rees is by any means bad in it. He limns Nicholas’ overmastering decency, and his impulse to compassion, exactly, especially in his interactions with Smike. But at nearly 40, he was a bit long in the tooth to be wholly capable of expressing the young man’s essential naïveté. Charlie Hunnam’s much more youthful Nicholas in the 2002 movie was rather closer to the mark in that respect, and he had the built-in advantage of being young.

Far more problematic is the video direction by Jim Goddard. First, there is the disturbingly occasional glimpse, or sound, of the live Old Vic audience, in a series otherwise obviously taped without one. As Nunn and Caird utilized the theatre itself in their staging, a complete record of the production virtually demanded the spectators’ inclusion. And while I can understand the impulse to capture the bulk of thing without the constant, and intrusive, sounds of laughter and applause from the audience, and the chance to do a scene, or a moment, over, the result is a curious hybrid that does not solve the problem satisfactorily.

Worse, Goddard often places his visual emphases in an almost arbitrary fashion, spoiling Nunn and Caird’s stage tableaux either by focusing in too close on a grouping or, weirdly, cutting away from a moment, or an actor’s performance, to its utter detriment. A perfect example of this striking ineptitude is the moment when the marvelous Rose Hill as Mrs. Gruden ends her hilarious coloratura trillings, begins the verse of her “Farewell” song and only then grabs a lungful of air. Rather than hold on the performer for maximum comic impact, Goddard cuts, incongruously, to Nicholas and Miss Snevellici. His direction is filled with such inexplicable lapses, often numbing when not outright killing the effect of Nunn’s and Caird’s stunningly expressive theatricality. The A&E presentation is likewise annoying: The video set climaxes each hour of the thing with end-credits, superimposed over the Old Vic audience going mad for what was, quite obviously, the final curtain call.

Still, as a record of an unforgettable event, this Nicholas Nickleby will do. Aside from the variety and assurance of the RSC company and its directors, and the starkly utilitarian splendor of the settings by John Napier and Dermot Haye, the home video set also captures the late Stephen Oliver’s* superb underscore and songs and David Edgar’s subtle genius at distilling a massive novel, retaining as much of Dickens’ more pointed observational prose as a stage can reasonably contain, presenting the narrative and the characters with fealty, and doing so in a way that is both epic and intimate — and, always, appropriately theatrical. No small thing, that, and for a frustrated actor like Dickens himself, a fitting tribute.

If one has to cry, there are certainly worse things to weep over.

*Oliver, a formidable composer of opera, succumbed, as did far too many of his male contemporaries, to AIDS, in 1992.