Making his first appearance in the world the same year as your humble scribe was one of my very favorite cartoon characters. Professor Ludwig von Drake, acknowledged expert on everything (and if you don’t believe that, just ask him) debuted on Walt Disney’s Sunday evening showcase The Wonderful World of Color, as it then was, in September 1961. He is unique among what I think of as the great Disney characters in that he is the only one who was created, not for the movies, but for television.

Designed by the magnificent Milt Kahl, Von Drake benefited from the use of the then-new Xerox technology so beloved of the Disney animators because, unlike more traditional ink-and-paint coloring and finishing, it preserved their original drawings in a rougher (and, they believed) truer form, preserving the spirit of their renderings. The Professor, with his fringe of hair and feathery hands, was a natural for the Xerox treatment.

For many years, I mistakenly attributed Von Drake to Ward Kimball’s dry, comic brain. Kimball did animate the Professor, although Von Drake’s initial appearance, in which he sang “The Spectrum Song” by the Sherman Brothers, was directed by Hamilton Luske and animated by Woolie Reitherman and Les Clark.

If you look at Von Drake’s physiognomy, though, there is an uncanny resemblance to Kimball in his later years. However, since Ludwig’s emergence took place during the animator’s middle age, this is surely, however attractive a thought, merely retroactive suggestion.

The Disney organization seemed to be pushing Von Drake for stardom pretty hard at the time of his debut. He showed up on magazine covers… 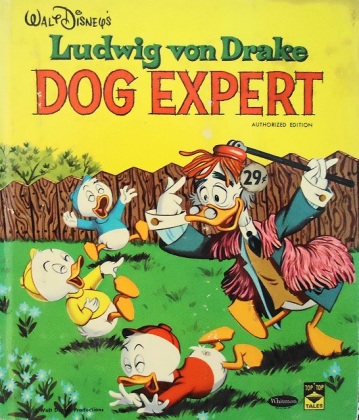 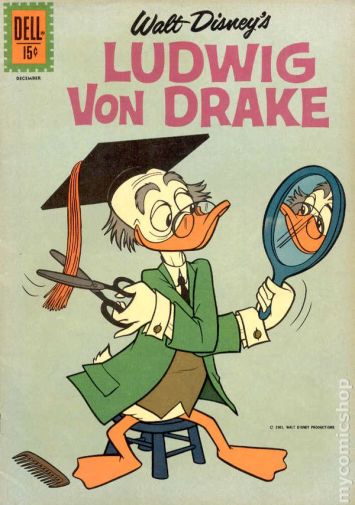 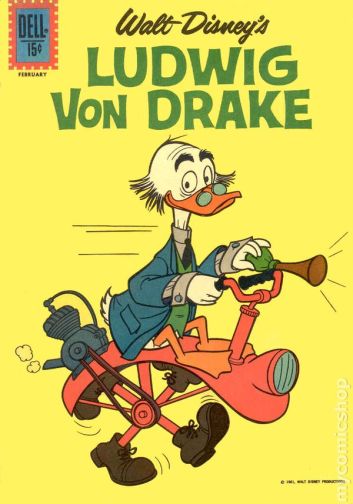 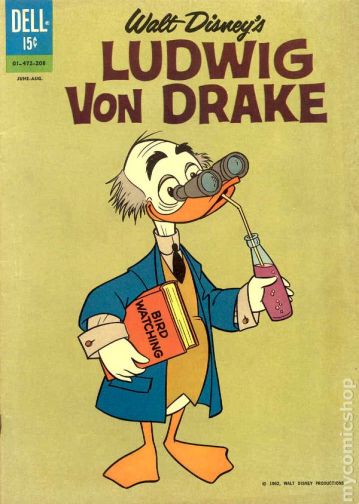 … on jigsaw puzzles (I had this one, four or five years later)…

Still, there was something about Von Drake, beyond the Disney hard-sell. First, Kahl’s brilliant character design. Second, his vocalization by the great Paul Frees. Of all Frees’ myriad comic voices (Boris Badenov, Inspector Fenwick, Super Chicken’s sidekick Fred, the Burgomeister Meisterberger) Ludwig is his masterpiece: The only slightly exaggerated accent* (all those marvelous, rolling r’s), the explosive temper (which, in spite of the lack of official genealogy, does rather link him both with Donald and with Scrooge McDuck), the muttered asides, the outrageous braggadocio.

Although Von Drake appeared in some very fine short subjects both for television (An Adventure in Color, Kids is Kids, The Truth About Mother Goose) and theatrical release (A Symposium on Popular Songs) nowhere is his (and Frees’) absolute brilliance demonstrated more completely than in the superb Disneyland LP Professor Ludwig von Drake.

I discovered this record in a music shop in downtown Mt. Vernon, Ohio in 1970; the proprietor, who stocked sheet music and instruments as well as a few LPs, had a wire-rack display of Disneyland and Buena Vista albums. I must have taxed his patience pulling out these treasures over several months, weighing which one I wanted most (the That Darn Cat soundtrack? The Sorcerer’s Apprentice?) but always coming back to Ludwig. Since I only received a half-dollar weekly allowance, of which half went into my savings account, that other half had to go for my comic books (15 cents then, and I’d never forgiven the publishers for raising the cover price from 12) and whatever else I wanted. I must have gotten a few extra dollars for Christmas or my 10th birthday, because one day that winter I nervously approached the music shop with the whole six dollars necessary in my hand, earnestly praying Ludwig was still there.

I damn near wore that record to the constituency of a hockey-puck.

The album’s delicious songs are by Disney’s house composers, the then pre-Mary Poppins Richard M. Sherman and Robert B. Sherman. And while there is no writer credited on the LP jacket, I now assume (and await correction for this presumption) that they wrote the material on it, in collaboration with Frees.

Richard B. and Robert M. Sherman, at work on the songs for The Jungle Book in 1967.

Aside from the songs, and a few gags, however, nothing on the album feels written. Frees’ exuberant, egocentric chat — hilarious muttered asides and all — sounds wholly ex tempore, as if it was all pouring out of his (or Von Drake’s) brain and off his tongue at the moment the reels of tape began rolling. Early on, Von Drake begins nattering about The Wonderful World of Color as though he was solely responsible for it, his muttering becoming more and more indistinct as he prattles on about some imaginary creative genius called Disney (“…some kind of a duck or something…”) Walt must have loved that.‡

I don’t know exactly what to call what the Messrs. Sherman, Sherman and Frees wrought on this album, but each time I hear it I find it perilously close to some kind of crazy genius.

A Wonder Bread premium sticker from the 1970s. I remember this one with a great deal more pleasure than the memory of chewing that sawdust-and-mucilage solid gruel they called a loaf of bread.

*The conception of Ludwig — an educated blowhard who’s nearly always wrong — owes much to Sid Caesar’s recurrent “Professor” character from Your Show of Shows, although Caesar’s accent is much broader than the one Frees opted for.

‡The LP was re-released on CD, slightly and rather curiously truncated (a snippet of introductory music and dialogue at the beginning of “I’m Professor Ludwig von Drake,” a word or two here and there later) at one of the Disneyland shops in a sale-on-demand format. I’m grateful and relieved I managed to snag a copy online, as it seems no longer to be made.