Arguably Woody Allen’s best movie, it’s both hilarious and deeply troubling. A successful optometrist (Martin Landau) tires of his mistress (Anjelica Huston, memorably needy) and decides the only way out is to have her killed. Yet Landau is on an ascending arc compared with Allen, as a documentary movie-maker chafing under the contempt of both his wife (Joanna Gleason) and his obnoxious movie producer brother-in-law (Alan Alda) and becoming infatuated with Alda’s assistant (Mia Farrow).

Alda’s line “If it bends, it’s funny; if it breaks, it’s not funny” seems like just another of his pretentious mots, but by the end of this movie, it’s been proven, to the Allen character’s unutterable regret.

There’s also a rabbi who’s going blind (Sam Waterston, in a lovely performance) and Landau’s brother (Jerry Orbach), the killer he hires to murder Huston. (You can see why Allen wanted to call the movie Brothers.) 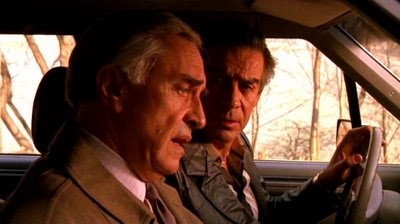